The Agulhas Wine Triangle – A place to explore 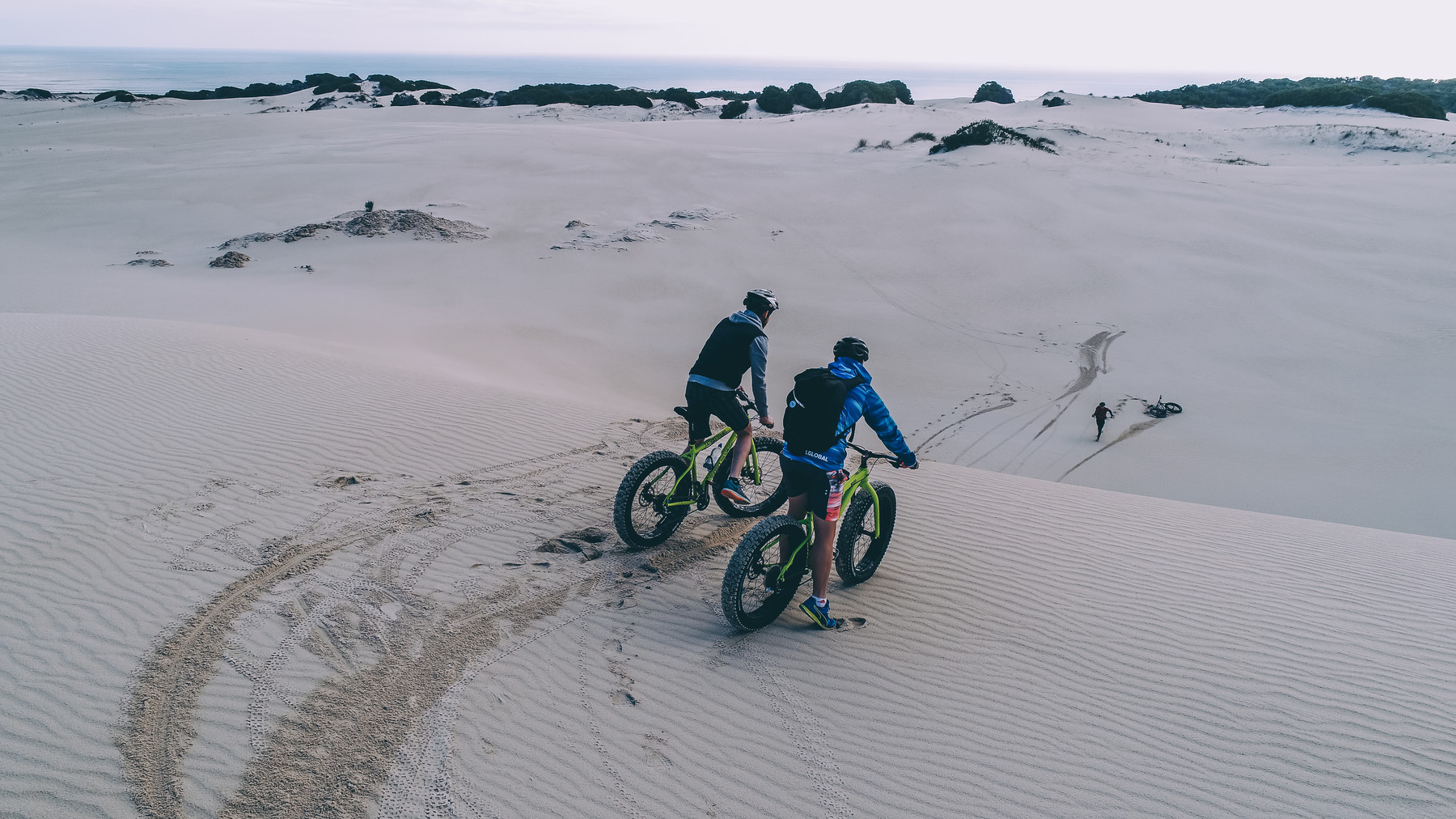 Clifford Roberts shares his experience of the intriguing territory of the Agulhas Wine Triangle.

“My grandfather witnessed the shooting of the last hippo here in 1855,” says local farmer Dirk Human as we look out over a lake of the Nuwejaars Wetland. Now the hippos are back, part of a pioneering conservation initiative of which he’s chairman, alongside being owner of Black Oystercatcher Wines.

The sprawling wetland is one of the surprises that visitors in pursuit of a new wine experience might not expect: 46 000ha of wilderness under protection and populated by game and a dazzling array of wild fauna and flora species.

As for wineries, they’re spread far apart in this intriguing territory. The wine region itself is so expansive that my travel partner and I undertake our exploration on two separate occasions, within weeks of each other. My bike, our walking shoes and binoculars are loaded on both occasions. 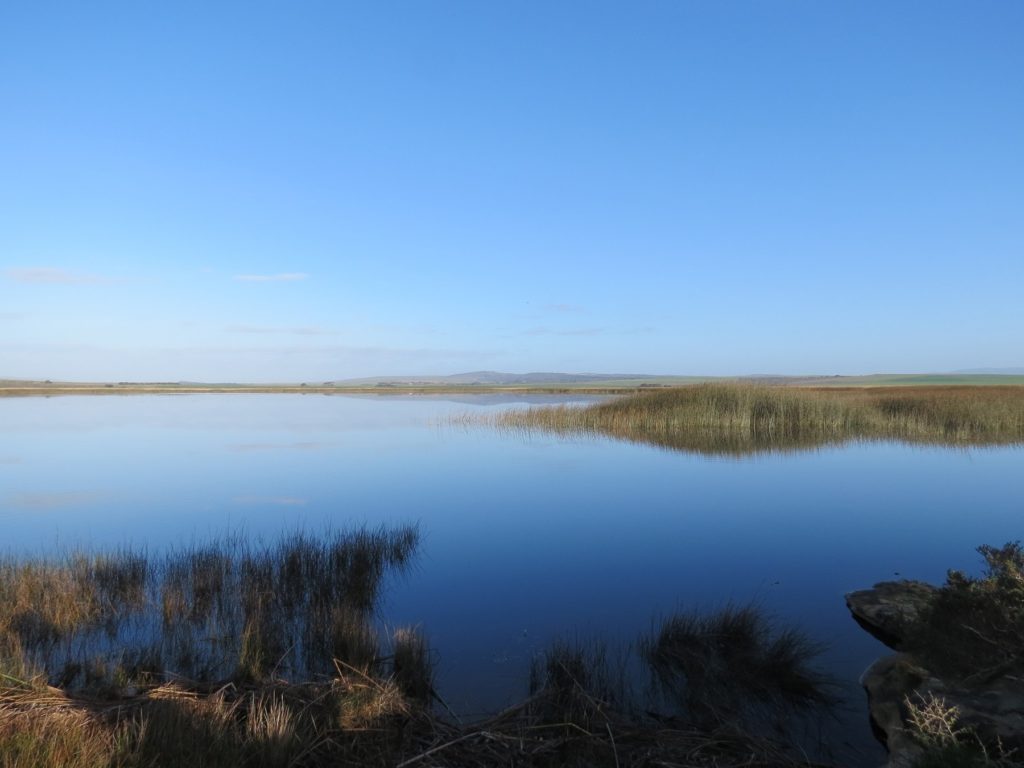 Vineyards are relatively new to the area by comparison to most others, but the region returned to the headlines since wineries officially established themselves under the banner of the Agulhas Wine Triangle last year.

The move to grapes really began post-1994, erudite wine innovator Bruce Jack of The Drift Estate near Napier points out in in his eponymous online journal. It came about when “a bold triumverate of wheat farmers [Johan de Kock, Francis Pratt and Dirk Human] in Elim, near the southern tip of Africa, who hooked up with a brilliant winemaker, Charles Hopkins (now with De Grendel); a celebrated viticulturist, Johan Wiese; a hot-shot accountant, Pieter Ferreira; and wine businessman Hein Koegelenberg (now the Chief Executive Officer of La Motte, etc.)…

“Without their audacious vision or planning rigour, Elim would never have established itself as one of the most emblematic terroirs of the world.” 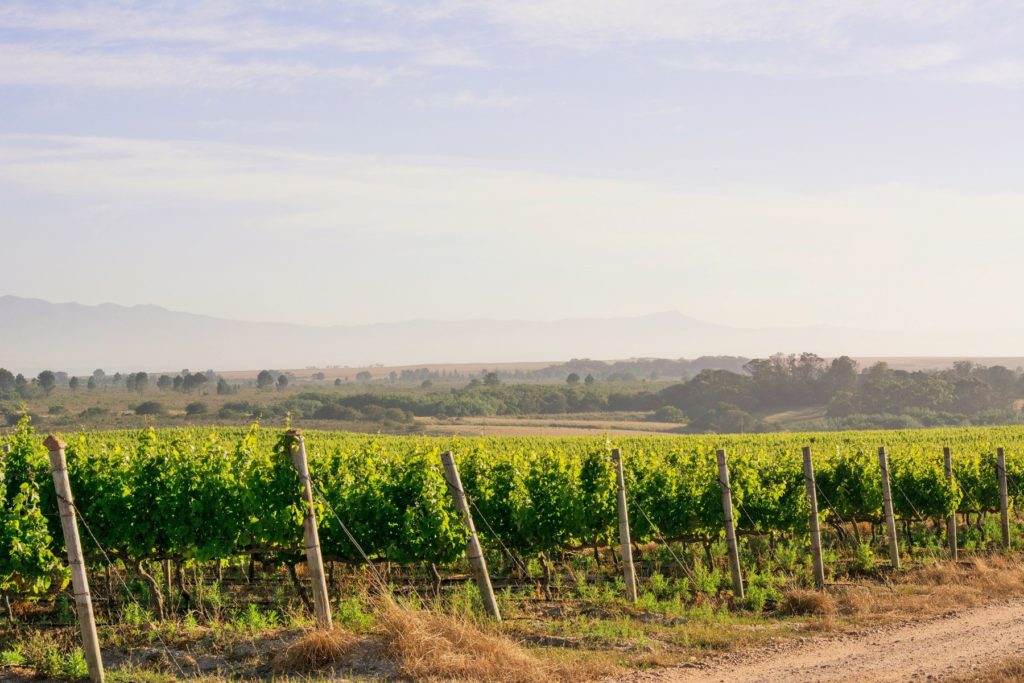 Just being on the road here gives you an idea of what that means. Fields of grain and grazing are interspersed by swathes of wilderness across flatlands and foothills hemmed in by an aggressive coastline and the mountain ranges of the Riviersonderend and Langeberg. The region is home to the Africa’s southernmost lake – Soetendal’s Vlei, one of the country’s largest natural freshwater lakes.

The vineyards are few. Like it’s coastline, the area’s climate is cool but can be wildly unpredictable and extreme. Perhaps not suited to the more risk-averse among us.

“Strong winds, violent storms and treacherous reefs earned the Strandveld coast the reputation of being the burial place of ships,” writes Marius Diemont in his book, The Strandveld – Africa’s foot of isolation (2010). The Zoetendaal, from which the lake gets its name, snagged a reef here in 1673 and became the area’s first recorded shipwreck.

The region’s population is still relatively sparse too. Arrival at a farm tasting room or accommodation for the night is extra special after a commute of relative solitude. That’s likely to change in coming months, at least for a few weeks when holidaymakers again head for many of the region’s principal towns like Agulhas, Arniston, Bredasdorp, Gansbaai, Napier and Struisbaai.

During the first of our two forays, we explore Swellendam, visiting the two out-of-sight Olivedale and nearby Sijnn Wines, sister property to David and Rita Trafford’s De Trafford Wines in Stellenbosch.

Olivedale is separated from the historic town of Swellendam by the Bontebok National Park and is reached by a gravel road via Buffeljagsrivier. The enterprise is owned by viticulturist winemaker Carl van Wijk and a group of Belgians investors. It’s Carl who welcomes us at the winery, a large warehouse. His office occupies a corner and doubles as the tasting room. His collection of antiques and Persian carpet are a stark contrast against the gleaming tanks. Classical music plays. It’s here that the winemaking team of Carl, Jolene Calitz Le Roux and, consultant Abe Beukes, make their magic.

Another stark contrast is the winery at Sijnn – a low, but dramatic wave in the landscape. Its first vintage was 2007. There are few visitors today, so winemaker Charla Haasbroek walks us around, first into the vineyards where bush vines rise from a surface almost exclusively dominated by pebble-rocks; then, in the tiny cellar. Just 22ha are under vine and only more recently have its blends have been joined by single variety bottlings.

We taste through a selection on the veranda which, overlooks several bends in the Breede River. 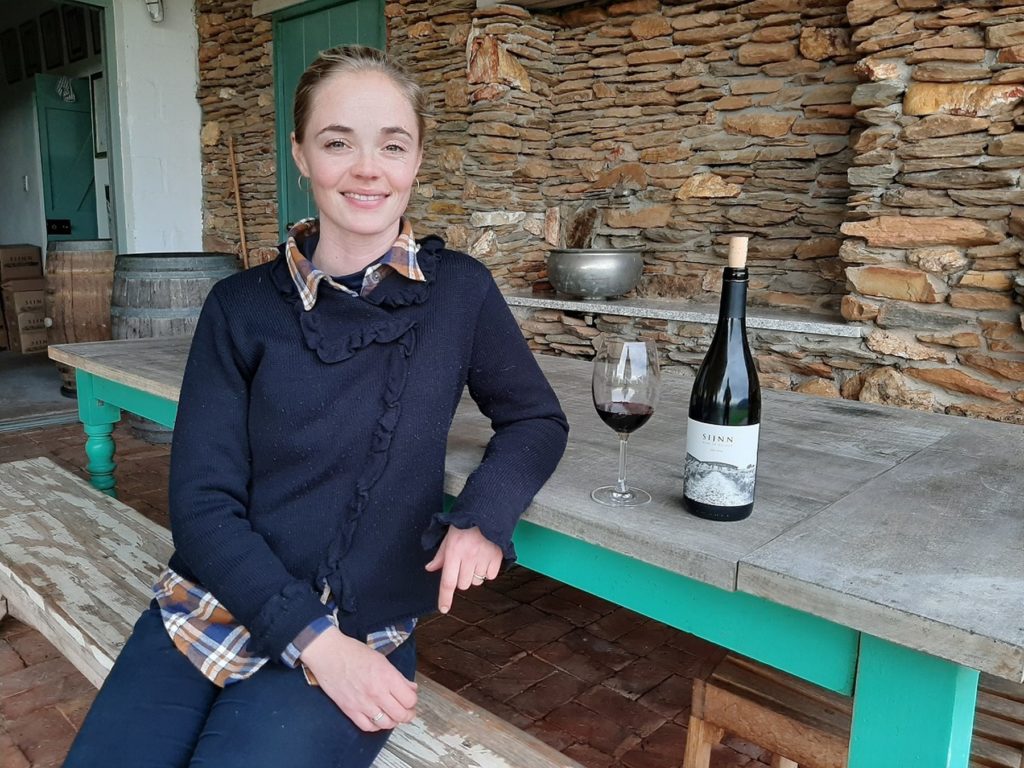 Later, we make our base at Black Oystercatcher Wines, which has four self-catering cottages. Like most, Dirk and Sandra Human’s business was upended by the pandemic. Its popular restaurant was closed for months; and Fraser’s Folly brewery, run by founder Fraser Crighton, was temporarily making soup for local communities in need.

Today, in addition to the wines and visitor experiences such as MTB routes, the winery runs a deli and pizzeria. 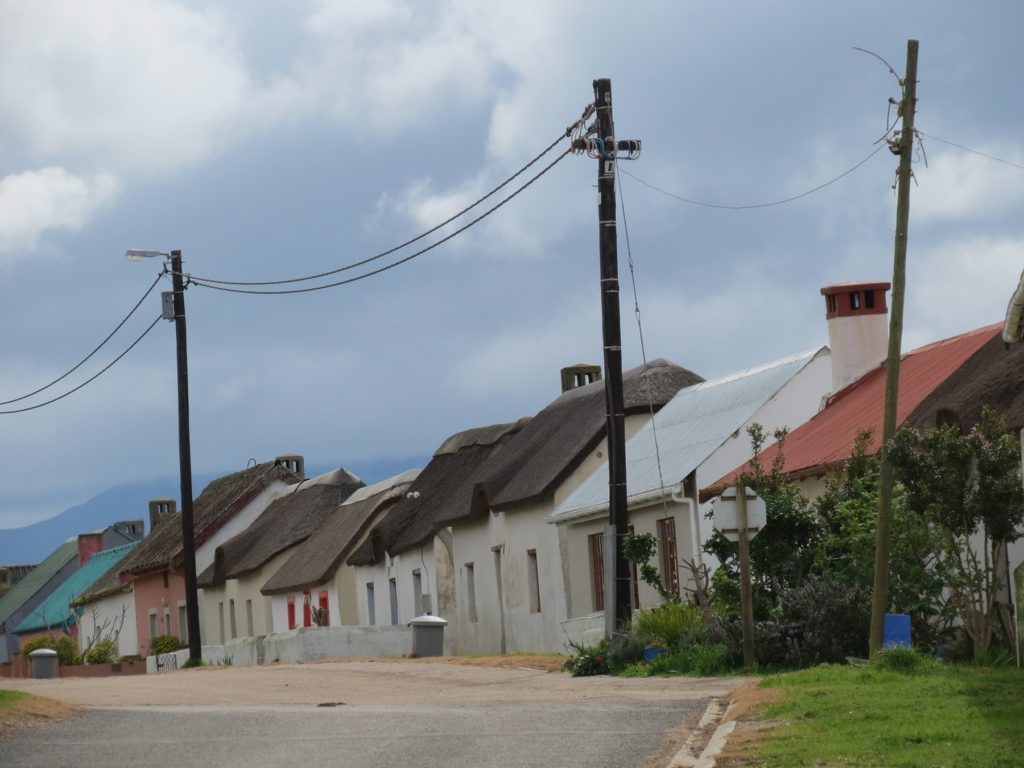 Nearby is Strandveld Vineyards, another of the region’s champions of Sauvignon blanc. Winemaker Conrad Vlok’s dog Levinia is the first to meet us in the car park when we arrive. There’s guest accommodation here too, with plenty of history on display in the renovated tasting room. Tapas platters are available with wine tastings and the lawns are great for children.

The farm adjoins the Nuwejaars conservation project and hopes to soon have a viewing deck from which some of the game can be observed.

Later, we make our way to another of the Agulhas Wine Triangle members, Lomond and find ourselves again passing through the historic former mission town of Elim. We too stop for photographs of the long, low buildings with whitewashed walls, thatched roofs and small windows. Not much has changed except for basic infrastructure such as tarred and paved roads.

It’s winemaker ex-Simonsig winemaker Hannes Meyer who welcomes us at Lomond. The wine tasting venue sits on a lake – one reason for its attraction over the weekend.

Lomond’s first grapes were planted in 2002, but changed hands in 2017 when Geoff McIver en David Mostert bought it from Distell. A year later Hannes was appointed, and a new winery was erected. The focus here too is increasingly Sauvignon blanc wine, but Hannes is equally excited about Lomond’s first MCC – a blend of Pinot Noir and Chardonnay – released this year.

Conservation is a big focus for the winery; its land overlaps with the Walker Bay Fynbos Conservancy and is one of the big attractions. 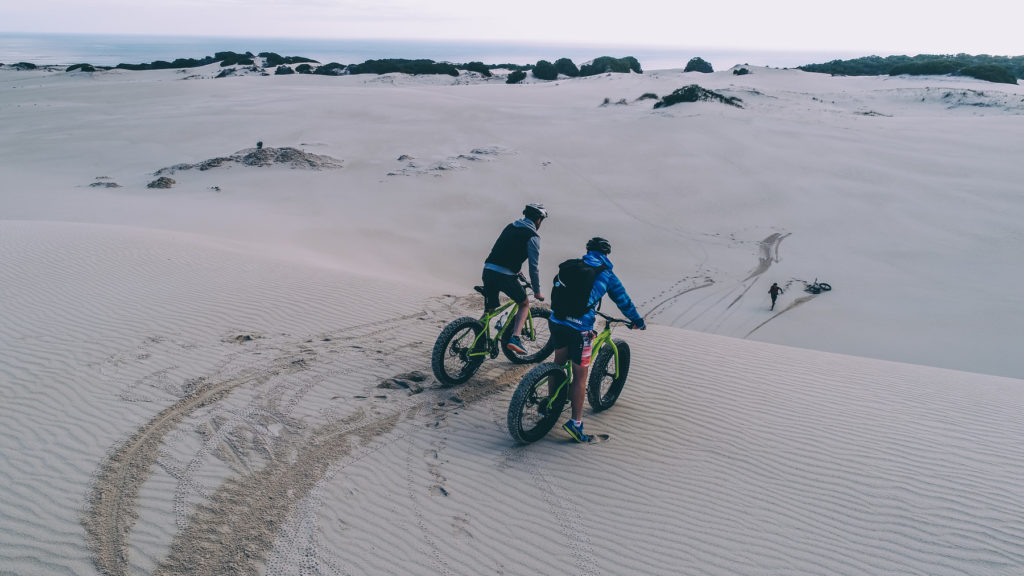 It’s this very biome that encroaches on the path to the small winery with the big name of Giant Periwinkle. Continuing the theme, its wines bear equally endearing names among them Baardbek, Sun Spider and Wind Scorpion. They’re certainly appropriate for a place that feels like the end of the earth. The tasting room served as the farm garage until 2017 when the new owners – two legal eagles and a pathologist – took over. One of the trio, Pierre Rabie, had long been making wine in rented premises and with other people’s grapes, until friends Robert Stelzner and Karen van Helden offered the partnership.

It was Pierre’s love of the sea in these parts and its natural environment that inspired their connection with the Giant Periwinkle wines.

Looking out over the wetland, where seven biomes intersect, it’s easy to appreciate the ties. Here is a region ripe to be explored.

If you’re stretched for time, visit the Wine on Main shop in Agulhas, which has a section dedicated to the Agulhas Wine Triangle. For information, email theresa@wineonmain.co.za.